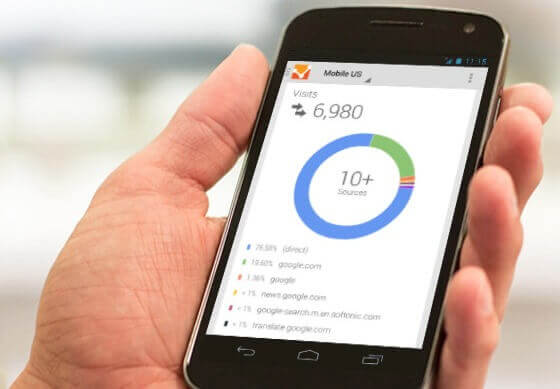 In this post I will share 10 ways to make your data collection for mobile app easier and smarter. This would save the time you invest in iterating over and over again to collect correct and meaningful data. After all, “A stitch in time saves nine”.
From a programmers perspective, data collection on an abstract level involves only three steps,

Basic steps every tracker of mobile app needs to take:

The database referred here can be anything, either your own custom service implemented to collect data or some popular analytics service such as Google Analytics, Omniture or Piwik.

Now we will see how to implement Google Analytics for a sample Android app.

Integrating the Google Analytics SDK (GA-SDK) requires you to follow the steps below,

While the Google Tag Manager does the same thing as the GA-SDK, it acts as more of a middleware with everything being sent to data layer. The tag manager acts as a middleware between your application and Google Analytics. Your application pushes each and every user interaction data to data layer. The data layer is then evaluated/parsed by the tag manager based of the predefined/user-defined macros and tags are fired based on the rules.
The prerequisite for using GTM for tracking user interaction is that you should have GTM integrated into your app, which involves you to create a GTM account and opening the default container.

In the implementation, the differences between Google Analytics and Google Tag Manager :

Lets move on to some of the smart ways to have a full proof data collection methodology.

The EasyTracker methods take the Activity context as an argument and hits GA with the full qualified name of the Activity. e.g. FeatureOne activity would be seen in the Screen view reports as com.example.main.FeatureOne

Such reports would expose your application package names which is undesirable and the reports gets messy too with such long names.

To avoid this in the analytics.xml add string resource name for each Activity in the below form.

Also, in your app you might have certain reusable activities that load content based on the Intent parameters they are provided. Say for an e-commerce app, the product page activity would show product based on the id it is provided.

You can always track user interactions anonymously by assigning a random visitor-id to each user. Tagging users with the visitor id would give you a detailed analysis which would be an additional advantage while fulfilling your user’s requirement.

Below is a utility class for generating a visitor id and persisting it across users multiple session.

This generates a random number of 13 digit sufficient enough to identify a lot of users individually,

The only public method here is the id() which would create a random integer when called for the first time. The random id() is stored in a file named INSTALLATION and returned for subsequent calls.

For doing the above, you need to have add a WRITE_EXTERNAL_STORAGE permission to the Manifest file.

NOTE :- Limit your visitor id length according to the tools which you would use for performing the data processing and analysis.

The mobile app analytics from Google only supports Universal Analytics tags. There is no support for a custom variable, instead we have custom dimensions which can be used. Create a dimension for visitor id and send the random number generated in the app.

Here, the argument to Fields.customDimension(index) is the index of the custom dimension.

If you are running campaigns for your apps then you should know which campaigns and traffic sources are sending users to download your app from the Google Play Store.

Only two changes you would require for this to work,

In certain use cases knowing the installation date would be really important. For this a specific event for the same can be sent to Google Analytics. A small change in the Installation utility class would do the trick. Here, a custom dimension for Installation date can also be created.

#6 Things to keep in mind while setting up tracking ID

Operating System is a default dimension in Google Analytics. Tracking different platforms of an app in the same property. You might want to create different Views filtered as per the operating system.
App Version is tracked as a dimension in Google Analytics. So, track different app versions in the same property.(This would facilitate comparing the reports of earlier version wrt to the latest build )

You can always download the latest binary container from the Web Console and save it in your application. This would allow you to see tags being fired in Google Analytics Real Time.

Set up one container per mobile app. Each new major version of your app should have a new container. Minor updates to an app can use the same container

Lastly, after all your implementation is done either via Google Tag Manger SDK or Google Analytics SDK, you need to update the app on Market Place. Some of the points to bear in mind are as below,

Sudhir is a Technical Analyst at Tatvic. He likes to develop data-analysis applications and automating the analysis process. Google Facebook Ads Install Data Missing in Google Analytics? We are at your rescue