Want our Blogs straight to your inbox?

Thank you,
Your sign-up request was successful!
Check out Latest Case Study : How we reduced Cost per Acquisition for    by 57% with

To fit logistic regression model, glm() function is used in R which is similar to lm(), but glm() includes additional parameters. The format is

Here, Y is dependent variable and X1, X2 and X3 are independent variables. Function includes additional parameter family and it has value binomial(link=”logit”) which means the probability distribution of regression model is binomial and link function is logit (Refer book  R in Action for more information). Let’s generate a simple model. Suppose we want to predict whether a student will get admission based on his two exam scores. For this problem we have a historical data from previous applicants which can be used as the training data set to build a model. The data set contains the following parameters.

In the above parameters, parameter admitted has value 1 or 0 for each observation. Now, we will generate a model that can predict, will student get admission based on two exam scores? For a given problem, admitted is considered as dependent variable, exam_1 and exam_2 are considered as independent variables. The R code for the model is given as  below.

After generating the model, let’s try to predict using this model. Suppose we have two exam marks of a student, 60 of exam_1 and 85 of exam_2. We will predict that will student get admission? Following is R code for predicting probability of student to get admission.

Output is 1 means a student will get admission. We can also predict for other observations in the above manner. Finally we understood what is logistic regression? And how it works in R? If you want to do the same exercise, Click here for R code and sample data set of above example. In the next blog, we will discuss about a specific problem for Google Analytics data and see how to use logistic regression into?

Amar is data modeling engineer at Tatvic. He is focused on building predictive model based on available data using R, hadoop and Google Prediction API. Google Plus Profile: : Amar Gondaliya 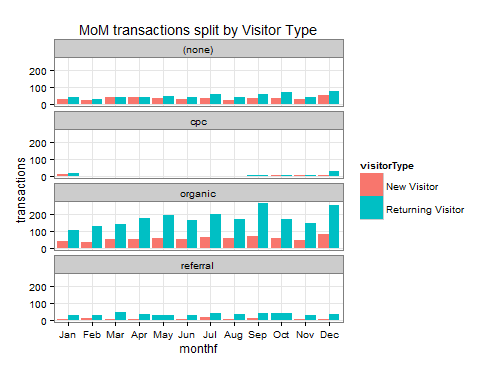 Thank you so much 😉